A garden by the sea

I visited Chygurno in May 2015. It’s a privately-owned garden – no tea shop, no toilets – just an honesty box in the porch and a homemade information board. I paid my money, read the history and wandered alone along the narrow paths, brushing past tree ferns and blood-red azaleas*, down into the damp, bluebelled shadows and up into the sunlight for tantalising views of the distant turquoise sea. I didn’t see anybody else until I was driving away down the narrow lane. 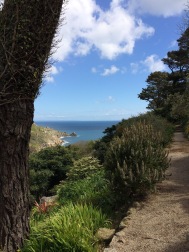 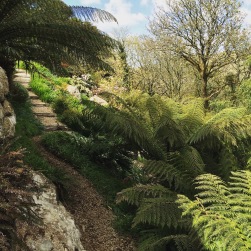 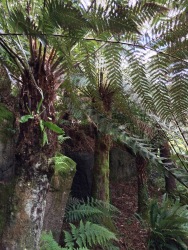 According to Katherine Lambert’s Gardens of Cornwall, Chygurno was built in 1908 by two women who offered it as a refuge to fellow suffragettes recently released from prison. Here I’ve taken some liberties since in my book I describe a house that was already old in 1913. I remain true to the suffragette connection (which was indeed the inspiration for my story) although I made one of my gardeners a retired matron to justify women travelling all the way from London to be nursed back to health following forcible feeding. 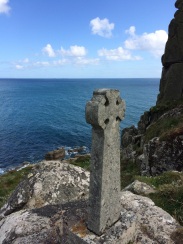 Further along the coast, I followed another lane down a wooded valley to a small cove. I forget the name of the cove but there was a jetty and a row of white cottages (one a delightful café).  I parked the car and followed the narrow cliff path for a kilometre or so and there I came across this stone cross. If my book ever gets published – and you perchance read it – you will discover the significance of this cross.

I’ve not been back to Chygurno. I would like to go one day. I know it won’t be the garden of my imagination – the one to which Charlotte fled, where her wounds healed and where she fell in love – but I don’t think that will matter. It’s still a very special place.

[*This is a lie. I have photographic evidence that the azaleas were shocking pink – but in my memory they were red and when one evening a storm surged up the valley the wind splattered the petals over the lawn like blood. Please indulge me here!]

This site uses Akismet to reduce spam. Learn how your comment data is processed.

War Through Other Stuff

Information and updates on the War Through Other Stuff Society

Writers group run by Blackwell's Bookshop and The Oxford Editors

newspapers and the great war

Thoughts of a wife, mother and historian (not necessarily in that order).

Letters home from five brothers during the First World War

The home of the Four Nations History Network